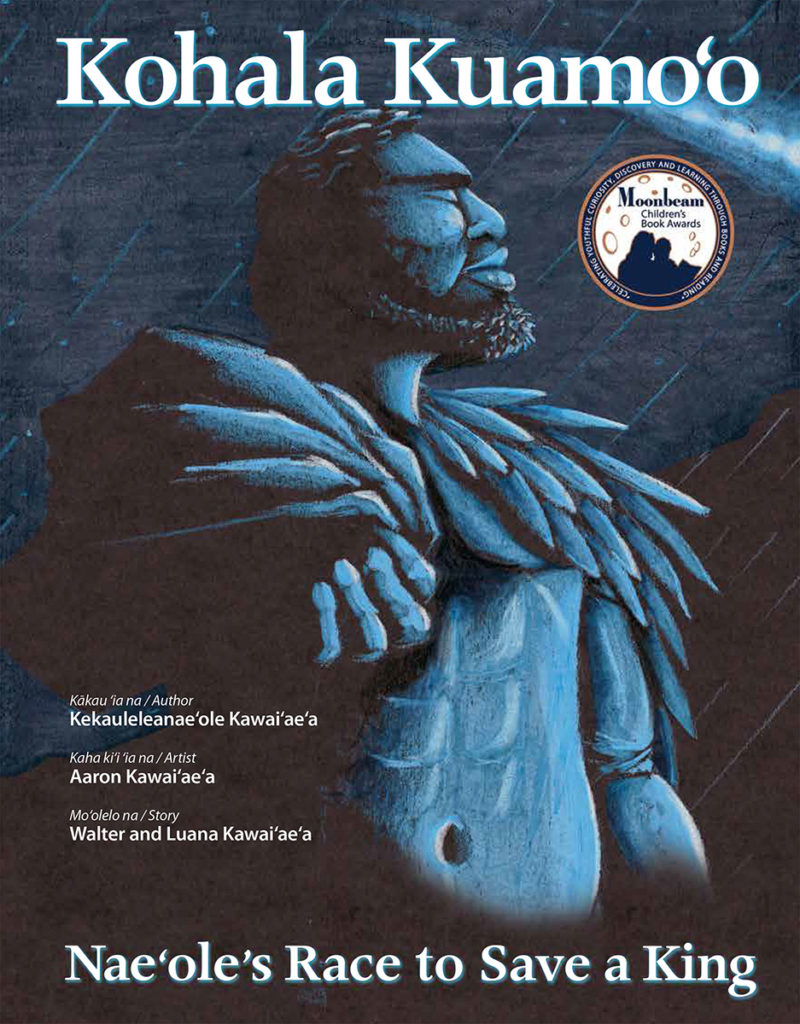 When a prophecy proclaims that the unborn Kamehameha would grow to overshadow the ruling chiefs, his life from birth is in danger. Nae‘ole, the trusted chiefly attendant of Kamehameha’s mother, races across Kohala to save the infant Kamehameha.

The title Kohala Kuamo‘o refers to the trails and paths in Kohala that are integral to the story of Nae‘ole and Kamehameha. The title also suggests the customs of the people of Kohala in caring for each other. In addition, Kohala Kuamo‘o hints at Nae‘ole’s role as the iwikuamo‘o, the most trusted personal attendant of Keku‘iapoiwa, the mother of Kamehameha.

The initial printing of Kohala Kuamo‘o commemorated the 200-year anniversary of Kamehameha’s unification of the Hawaiian Islands under one rule in 1810.

Kamehameha, a high-ranking Hawai‘i Island chief from the district of Kohala, was the first ali‘i to unify the Hawaiian Islands as a single nation, ultimately establishing the shared identity that Hawaiians enjoy as one people. His achievement fulfilled prophesies that foretold his greatness even while in the womb of his mother, Keku‘iapoiwa. Hearing such prophesies, Alapa‘inui, the Hawai‘i Island ruler of the time, ordered that the child be killed upon birth. Kamehameha’s life was nonetheless safeguarded through the efforts of his first guardian, Nae‘ole of Hālawa.

Nae‘ole, a chief of Hālawa, Kohala, was the iwikuamo‘o or most trusted and close attendant of Kamehameha’s mother, Keku‘iapoiwa. He was given the responsibility of safeguarding Kamehameha from the first moments of his life through to his young childhood. Pursued by an army of the ruling chief, Nae‘ole traveled over miles of difficult terrain during a torrential storm to bring Kamehameha to the safety of ‘Āwini, Kohala. The story, Kohala Kuamo‘o: Nae‘ole’s Race to Save a King, describes how Nae‘ole was able to do so with the loyalty and assistance of Kohala’s people.

Kohala Kuamo‘o has several main characters in addition to Kamehameha and Nae‘ole: Keku‘iapoiwa, Kamehameha’s mother, was a high-ranking chiefess of Kohala. At the time of Kamehameha’s birth, Keku‘iapoiwa was the highest-ranking female of the Mahi clan, a Kohala chiefly lineage known for its strong leaders. Alapa‘i, was the ruling chief of Hawai’i Island at the time of Kamehameha’s birth. Alapa‘i ordered that Kamehameha be killed as soon as he was born but later brought Kamehameha to his court to be reared as a high chief. Kaha‘ōpūlani, was the half-sister of Nae‘ole and chiefess of Kohala. Kaha‘ōpūlani breastfed and helped to care for Kamehameha during his young childhood. All of these historical figures played an important role in the life of Kamehameha.